Sigh - they said we were going camping but there was driving and more driving. Then Mum and then Dad would disappear into some washroom type place! Well, after some stops to find some new hardware and some maps (because Mum forgot to go to AMA) we are finally camping at a very nice campground on the Grande Prairie Regional College grounds. There is lots of birds to watch and trees that I think I can climb. Now this is camping. 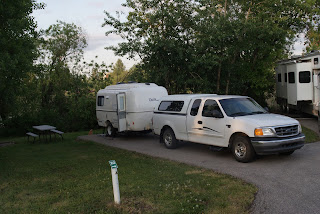 On our drive here we saw 2 deer – one running across the road and one having second thoughts.
We got a bit of a late start by the time all the neighbours came by to say “ have a good trip; don't worry we will look after things”. Thank goodness for terrific neighbours.
All is well, truck is running well. Trailer is a little bouncier so there is some re-organizing when we stop.
That's all for now,
Rusty, Nancy Lee/Mum and Dave/Dad

We saw 2 Snow Geese flying north.
We had a stopover in Dawson Creek. Here I am at MilePost 0. I really like to climb on things. Mum and Dad had lunch from the bakery. 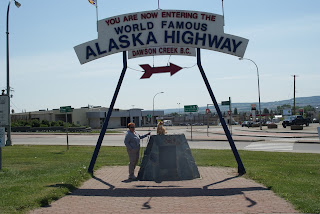 There was construction outside Fort St John on that very steep hill – Taylor Hill. Dad drove very well but Mum still had white knuckles but the time we made it to the bottom of the hill. We have come to realize if you see “chain on signs” that hill is going to be steep. It was a wonderful view but there was no way to stop and take a picture.
We stopped for the night at the Pink Mountain resort. Sadly, The Pink Mountain resort does not quite live up to the hype in the Milepost mmm – it maybe what we can expect from here on in. PS: June 13 – the couple from Florida said the same thing – if this is the best campground on the Alaska highway then we are in trouble. PPS: June 15 – when Dad was “lost” at Liard Hot springs he was talking to a guy with an r-pod. He did say that Pink Mountain had been quite nice until all the work camps moved in.
We met Marshal – his was riding his motorcycle from somewhere in Alaska back to Nova Scotia. Although when we talked to him he was deciding whether to go south to Prince George and wait for his girlfriend or whether to go to Nova Scotia and ride back out with her when she retires. Sadly his bike tires were getting down to the the thread so I hope he made it to Fort St John OK. It was pouring rain when he left and it looked like the rain was going to travel with him.

I had a little fun with Mum and Dad before we left Pink Mountain. My harness was not as snug as it should have been so I managed to squiggle out of it. I ran off towards the workmen – tail in the air, grinning over my shoulder. The workmen had a good chuckle watching Dad trying to catch me. It was good fun.

We saw 2 coyotes, 2 bears, 3 moose and 1 bison. Let me tell you about the second bear. Dad couldn't get a good picture from inside the truck so he got out. He very carefully kept the truck between him and the bear even though the bear was quite far away. It was patting the grass trying to scare up mice or ME! As it started getting closer I am not ashamed to admit I tried to make myself as small as possible. My ears went back and down and I executed the down periscope maneuver to get myself below the window. I was very quiet for the rest of the day!
It was interesting to watch from afar until the bear started moving towards the truck.

It was rainy and Dad was playing tricks with those funny black arms on the window. I kept batting at them and still they wouldn't stay put. I even growled at them but still they kept flapping. Every time I thought I had them vanquished they would pop up again. Dad would giggle so I am sure he had something to do with it.

We stopped at the Tetsa River lodge for cinnamon buns. There was a dog that seemed a little shy of me but the man and women running the bakery were very impressed by my tail. We also met another lady that had stayed at the same campground last night. She needed some cat love so I obliged. Mum and Dad got yummy cinnamon buns for tomorrow's breakfast. I get the same old cat food.

We are staying at Liard Lodge campground – nice and shady but the showers and laundry are not operational. That's where we saw the bison across the road. Doesn't it look shaggy – must be getting ready for summer.
When it was getting dark I heard something in the bushes. I was going to check it out but Dad grappled me and put me in the trailer for safe keeping :). We are staying here for 2 nights – thank goodness we are finally camping.