Today I had a sick day. I must have got into something that upset my tummy. I had a bit of diarrhea and complained a lot in the truck. Bottled water for me for the rest of the trip.
Mum made an interesting breakfast using leftover liquid egg, ham, cheese and tortillas. I think with a little tweaking it might become part of their regular fare. Mum likes toast with her eggs so this was a good adaption seeing as toast is difficult to make on a camp stove.
After leaving Whitehorse we took the little detour to Carcross and Taigish. 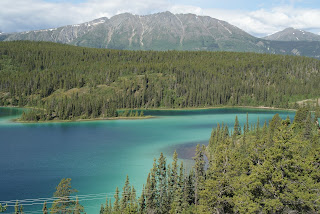 We saw a really pretty lake, Emerald Lake. It really was emerald colour. We missed seeing the Carcross Desert. Our friend Lorraine recognized the lake as soon as she saw the picture.
The mountains looked a little different from this side. We didn't do much other stopping for scenery shots today – mostly stretch and clean up breaks. Our lunch stop was just outside Teslin. There was a big lake and the information panels talked about the salmon, how things grow in the north, paddle wheelers and the First Nations people. We stopped at Rancheria Falls again for a stretch break and to see if we could get ahead of a slow truck.
We had to stop in Watson Lake to get gas and then backtrack to the Watson Lake campground. 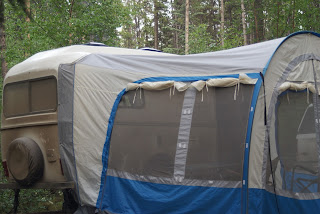 The sites are really narrow so our tent is on a slope. The black flies seem quite vicious so the tent is advisable.
Tomorrow we are going to try to get into Liard Hot Springs. If we can't Mum and Dad may take a trip to the hot springs and then drive onto the next stop.
I am feeling much better now – after eating 3 dragon flies :).
PS: After supper we went for a long walk around the park. We met a motorcyclist from LA that was very excited about his trip but he was totally unprepared for the weather. He didn't have a proper tent and his clothes kept getting wet. At one point he was so depressed he was considering returning home before he reached his final goal. Some oilfield workers talked him out of it so he carried on. He told us about his close encounter with the bison trying to cross the road. It got stuck on the concrete barrier and managed to get over just as Chris came along with his motorcycle. Once Mum and Dad were in bed it started raining again so Dad took a tarp and some rope over to his campsite. Chris was very grateful. He was also having trouble with a rear tire. We hope he makes it safely to Fairbanks where he has a new tire waiting from him.

We stopped in Watson Lake so Dad could wash the truck and trailer. Dad figures we lost 50 pounds of dirt! Mum and I walked on the boardwalk while we were waiting for Dad to finish. We stopped at Whirlpool Canyon. There was a lot of water and moving very fast. 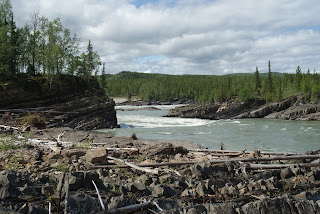 We met another couple from Edmonton that were saying they wanted to stay at Liard, too.
Today we saw 3 black bears, eagles and about 20 bison. The bison where all laying down having a snooze. We didn't stop for a picture because the turnout was full of other vehicles. Well, Mum and Dad also wanted to get to the hot springs before that other couple. We were hoping that we would get there early enough that we could get a spot and we did! Mum and Dad were pleased because they both needed a soak. Dad had to fix the water heater. It looks like all the dust from the roads plugged up the pilot light. Showers tomorrow for Mum and Dad – they both smell a little sulfurry.
Our campsite has a very brave squirrel. He has wandered into our tent more than once. He came nose to nose with me and was totally taken aback. Sadly there are no good trees to climb in this campsite. Even on our after dinner walk I didn't find a climbable tree. A small rabbit came to nibble on the grass in our site. Dad tried to get a picture but the rabbit caught site of the camera and ran off (just like Mum).
A nice lady from Arizona stopped by. She had to leave her two cats in a kennel because she is on a 3 month trek. She is part of a caravan that is going to the Arctic Circle and then back into Alaska. When we were on our after supper walk we met her and her dog, Maisie(?). The dog was a very nice golden retriever that reminded Dad of his dog Ginger. We carried on with her for awhile. One of the campsites had so much poplar fluff it looked like it had been TP'd. The Park Ranger said he was glad that I came camping in his park. He was very impressed by my tail. We met another nice lady from California. Mum and Dad chatted with her about all sorts of things. She has volunteered with Habitat for Humanity in various countries and shops at the Restore store – just like Dad. She had wanted a Casita but she is 6'1” so there wasn't enough room for her to stand up.
While Mum was reading her book Dad wandered off. When he hadn't come back after she had read 3 chapters she started to get worried. She walked up to see if he was chatting with the Casita owner (you know how Dad gets when he is chatting) but he wasn't there. When she was walking back to the trailer the Park Ranger was driving by so she told him she had misplaced her husband. He was driving around the loop so he said he would keep an eye out for him. Just as the Park Ranger returned Dad came strolling back. He had been talking to the owner of a Tab and lost track of time. We all had a little chuckle over that.

Today was a traveling day. We did make a few stops along the way and saw some pretty cool animals. Mum and Dad saw a mamma bear with her 2 cubs and then a bison. We finally got to see Stone sheep. There was a mum and her little one on the side of the road and then a few kms further on close to Summit Lake there was about 20 grazing beside the highway. The slope they were on was so steep.
I don't know how they could stand up. A little while later we saw a young caribou. We did make one stop that we shouldn't have. We were short on gas so we stopped at the Norther Rockies Lodge in Muncho Lake Provincial Park. Gas was a $1.79 per litre – the most we paid anywhere. Mum and Dad will try not to buy gas in provincial parks in the future :).
When we stopped at the Summit Lake lookout we saw the Pink Mountain lady. That is 3 times that I have seen her now.
We did stop at the Tetsa River Services and Campground for Cinnamon Buns but the lady was too busy to visit.
There was some construction and the speed limit was slower than expected so we didn't make as much distance as we expected today. We are staying at the Triple G Hideaway RV Park. It is definitely designed for the big rigs – there aren't many trees to climb. I did get to see my first horse today. They were pulling a wagon full of people. The driver was kind enough to stop and let the horses see me. One of the passengers was more excited to see a cat on a leash than being in a horse drawn wagon that he exclaimed “A cat on a leash – I've never seen that before” and took a picture for his daughter. That was the third time that I had my picture taken.
I did get my after supper walk but there really wasn't any interesting people. There is something really neat by the restaurant – a smell of something – but Mum and Dad won't let me investigate.

Today was another traveling day. We went all the way from Fort Nelson to almost Grande Prairie. Tomorrow should be easier. Over hill over dale – Dad says – just think the bobsled runs that they would make. Mum says the scenery is terrific but I am not so impressed. The big construction outside Fort St John had no lane control today. Mum and Dad were relieved but disappointed when we crested the hill and a large oversize load truck pulled out if front of us. There are not many places to pass such a large vehicle and the pilot cars.
I am still feeling a little sick so I was cranky this morning. Once I a messy poop I was able to sleep most of the afternoon.
Mum saw 3 brown long-legged, long-necked wading bird. Dad thinks they may have been sand hill cranes. Our bird book is not very good so Mum will look it up at home. There was a bear but I didn't see it. Do elk and bison farms count on seeing wildlife? Probably not, Mum says.
We are staying at the Saskatoon Island Provincial Park. Guess what – I caught my first mouse. I waited patiently when I saw the bushes move. I finally spotted my quarry and approached quietly. I just lofted it out of the bushes onto the gravel. I was just getting ready to have some fun when Dad intervened. The mouse ran into the log pile. Maybe I can find him tomorrow. I think this is the best campground so far.
We walked down to the lake for our after supper stroll. There are some neat birds here but I am still looking for that mouse!
Dad says, if all goes well, we should be home about two tomorrow afternoon. I think Mum and Dad are looking forward to having their own bed and regular showers. Mum is rather tired of being covered in mosquito bites.

On one of our stops today I was playing in the long grass. Dad picked me up and tossed me further into the long grass. I hopped like the jack rabbit that lives in the front yard to get back to the gravel. Good thing I have that long tail for balance.
We are home. As soon as we crossed the Anthony Henday I could smell it. My whiskers were twitching with excitement. And suddenly there was my tree and my yard. How great to stretch out on my chair. Mum and Dad spent the evening cleaning up a bit. Well, the first thing I did was have a good drink out of the bathroom sink – how I missed that! And sleeping in the sink – it has such a nice shape.
It was a good trip maybe we will do some other long trip some day.

All our pictures can be found here: Yukon pictures