Mum and Dad packed up the trailer and we were off. There were planes in the truck so I guess we are going float flying 😸. Dad has been working really really hard on his 415 - a water bomber. He is pretty sure it will fly but the first flight is always a little iffy. Dad had it all set up and ready to go when it started raining. It rained and it rained and it rained.  It was starting to be the worst camping trip ever!

By Friday the weather improved and Saturday was perfect flying weather. Dad's plane did fly well.
One of the other pilots spotted for Dad on the first flight. The 415 flew very well. What a relief!  When Dad went for the second flight he noticed a small flutter so the plane was grounded for the rest of the weekend. He did have the Northstar so he still had many hours of fun flying.

We did have a bear scare while we were there. There was a big bang for the bear banger but I didn't see a bear that day. However the next day I heard rustling in the bushes. I peered and peered into the bushes. I even did the gopher stance to see better. There was still some rustling in the bushes so I slowly slunk into the trailer where I could watch from the safety of the table 🙈. I didn't even give a second thought to whether Mum was safe.... Mum was watching - the rustling turned out to be one of the boys playing with walkie-talkies. What a relief. 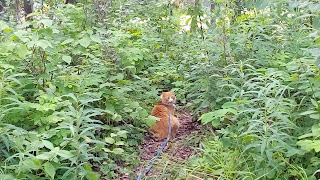 We didn't get our regular campsite but this wasn't all that bad. There was lots of mouse and squirrel activity. There was even a path that looked interesting. I didn't really want to go for a walk so I didn't even climb a tree.